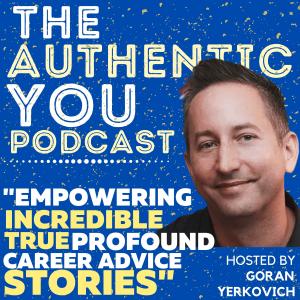 Chun Hon Chan is a Canadian who hasn't been recognized yet, but he was the FIRST Chinese-Canadian to represent Canada in the Olympics in Men's Weightlifting.

The main lesson is not in the loss of a loved one. But of what it truly means to find our way through life. To carve out a piece, that we can call our own.
To find our peace, and to find our home.”
— Goran Yerkovich

VANCOUVER, BRITISH COLUMBIA, CANADA, October 15, 2021 /EINPresswire.com/ — In this episode of The Authentic You Podcast, hosted by Goran Yerkovich, we rewrite a missing piece of Canadian Olympic History!

This story begins as most immigrant stories do, but ends with an inspiring lesson in just what can happen if you follow your dreams.

Chan was a Chinese Canadian immigrant who arrived in Montreal, Canada from Hong Kong at the age of 19 with little money, cleaning bathrooms to survive. Years later, he'd learn the business, working every restaurant position possible, to eventually become a restaurant owner himself.

He also married, raising a family with three children, but during all this time he began an unlikely journey.

A journey, which to this day, has not been fully recognized in Canadian history books.

Chun Hon Chan become an unlikely but fully deserving pioneering competitor in the Olympics, representing Canada in the 1968 & 1972 Summer Olympics in weightlifting.

During the peak of his career, Chan set five Canadian weightlifting records, breaking all stereotypes and barriers placed in his way.

The Authentic You Podcast recently had the opportunity to interview Chan's daughter, Debbie Chan, who shines bright in her family's tribute to her late father in this heart-warming conversation.

Weeks later, and we're still waiting for comment from the Canadian Olympic Committee.

But we need not wait for their reply, because this story, in many ways, has already been written.

This incredible true story is not just a piece of missing Canadian history – it's something much more. Because this is not just a Montreal story, about loving life and living it to the fullest, it's a Canadian story in being welcomed into a nation, a sport, and community without racial biased.

It is also a father's story, a family's story, and an underdog story in unwavering determination, despite all odds.

Ultimately this is a human story which proves, the improbable is possible – in setting big audacious goals and staying true to yourself, each of us can find our own way to shine.

Listen to my conversation with Debbie Chan: The Authentic You Podcast-S1E11: Interview with Debbie Chan, Daughter of a Forgotten Chinese Canadian Olympian Chun Hon Chan, Rewriting Canadian History & Finding Your Way to Shine

The-Inspired.com: How Do I Learn To Shine?