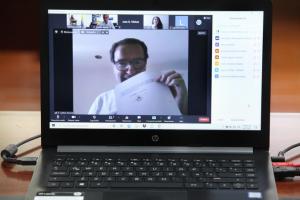 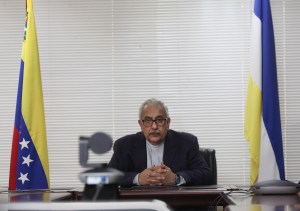 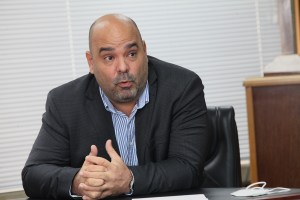 Carlos Dorado is satisfied with the UCAB / Italbank alliance, as there will be a great team committed to the success of the ideas

“We are firm believers that education does not change the world, but that it will change the people who are going to transform it”.”
— Carlos Dorado

In the UCAB University Council Room, the agreement was sealed as part of this alliance between both institutions, which will support the new generations of Venezuelan entrepreneurs and businessmen.

The virtual meeting was attended by Carlos Dorado, president of Italbank and vice president of Italcambio; Reverend Father Francisco José Virtuoso S.J., rector of the UCAB; Gustavo García Chacón, administrative vice-rector and secretary of Academic Extension and Relationship with Alma Mater Organizations; and Luz Aimara Morales, director of the University's Center for Innovation and Entrepreneurship (CIE), as well as representatives of the media such as GLOBOMIAMI, directed by Camilo Aguiar Méndez, and other special guests.

"Acelera, UCAB / Italbank" is an acceleration program aimed at entrepreneurs who will be trained remotely through the university's distance education platform through the CIE and the International Center for Professional Updating.

During the period of applications, 60 initiatives showed their interest in being part of the program, whose specialists will make a selection of the group that will make up the first cohort, with which it is also sought that each idea can be converted into sustainable businesses.

Father Virtuoso expressed his gratitude to Italbank for supporting this academic, business and social initiative, in "an economically depressed context, but necessary to accelerate the entrepreneurial ideas of many people who require an impulse to do so."

«Acelera UCAB / Italbank» is an excellent opportunity that will seek effectiveness, since it will depend on it that many other people can be part of the program in the future.

"Achieving the efficiency and success of what we want is a sign and signal of what can actually be done, that is why it is important," he said.

UCAB for several years has been immersed in the entrepreneurial ecosystem in Venezuela and its constant participation has been fundamental in the development of numerous projects, in relation to the training and education of the entrepreneur.

Gustavo García Chacón, administrative vice-rector and secretary of Academic Extension and Relationship with Organizations, in his dissertation prior to the signing of the agreement, said that during the UCAB 2023 Plan they ratified the interest in continuing to give a contribution to enterprises within the framework of the university's own capabilities.

"Acelera UCAB / Italbank" is part of a "puzzle to which additional pieces will be added," he said.

In this sense, "it is important to have programs that contribute to strengthening the capacities of small and medium-sized businesses already installed, as it seeks to extend the life of enterprises in Venezuela that have traditionally been part of a busy environment", stated García Chacón.

He announced that they have already signed with the Institute for Higher Management Studies (IESA) a plan to develop the Global Monitor Survey of Entrepreneurship in Venezuela.

He made it clear that around «Acelera UCAB / Italbank» there will also be initiatives that will serve and give a valuable contribution to the ecosystem of new ideas.

«We are aware that on the planet, the issue of entrepreneurship and innovation are central, since every day there is greater interest in the option and transition to the first job. With this we are contributing a grain of sand to the country, "he said.

The acceleration program for entrepreneurs that begins on September 6 and ends on December 9, 2021, with nine training and support modules, has always been the dream of Carlos Dorado, president of Italbank and vice president of Italcambio.

After the signing of the agreement on "Acelera UCAB / Italbank", the economist thanked the university for giving him over eight years, in his two careers, the necessary tools to face, conquer and make his projects come true.

«I must confess that I received an excellent education from the Catholic University. For this reason, I think that education is one of the most subversive areas that exists, because it allows the poor and the rich to compete on equal terms. Education is the only thing that equates us as human beings and has given me the necessary knowledge to function in life, ”said Carlos Dorado.

“We are firm believers that education does not change the world, but that it will change the people who are going to transform it. I know that the situation at the moment is perhaps not the best from the point of view of the environment to undertake, but there is always an opportunity, and the important thing is to have the desire and the knowledge to do so. Being an entrepreneur is not easy, but if we have a guide, a university that trains one, it will be easier to walk down that path », reflected Carlos Dorado

For the entrepreneur, it was always in his plans to transpolate his experience to other people. For what he considered it was a duty and a particular obligation on behalf of the institution he represents, to support any initiative that allows entrepreneurs to walk an easier and less complex path.

"When we talk about the business world -because it is something that touches us-, I started with a briefcase in my hand when I was just finishing my career as an economist at UCAB, with the knowledge and a great spirit of work", which are necessary to immerse oneself in business.

“Acelerates UCAB / Italbank” is part of Carlos Dorado's commitment to transmit his experiences and encourage other people to do the same and “succeed in embracing a business career. That is a dream come true thanks to UCAB, "he said.