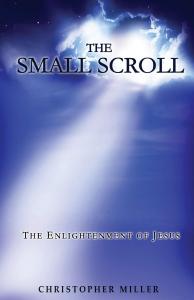 The Small Scroll: The Enlightenment of Jesus

CALIFORNIA, UNITED STATES, June 17, 2021 /EINPresswire.com/ — "Nobody could presume to speak in Jesus Christ's words," says author Christopher Miller. But with the Bible itself and 200 actual Biblical citations, namely the words of Christ from Scripture, he weaves a narrative that brings biblical events to life. With "The Small Scroll – The Enlightenment of Jesus" he takes his readers back in time to witness the happenings that formed the basis of the gospels and the origins of Christianity.

"The Small Scroll – The Enlightenment of Jesus" is a tapestry of faith-infused writing, a lyrical and prophetic saga that provides a timely message. Readers will see how, while his birth garnered much attention, Christ's youth remained normal and ordinary as he grew up under the care of his mother. The humanizing depiction includes scenes such as Christ visiting his father's workshop, learning the scriptures, and seeing hints of his origins such as watching his mother staring into the distance and recounting her meeting with an angel. Then readers will witness Christ's transformation into adulthood when he travels to Jerusalem with his parents during the Passover, gaining adult urges, wondering about the big questions in life, and realizing that he must pursue his devotion to God. Yet even as he moves towards fulfilling his destiny, he has no idea of the immense impact his actions will have on the world.

With this narrative, Miller tells the story of Jesus Christ in a way that puts readers in his position, to experience what could have gone through his heart and mind, as he partook in events that would change the world.

About the Author
Growing up in San Fernando Valley, Los Angeles, and later living in San Francisco, Christopher Miller worked as a bank manager and operated a mortgage company before his retirement in 1996. Now he lives with his life on an acreage in a UNESCO World Network Biosphere Reserve on Lake Huron. Recently, he had radio interviews on This Week in America with Ric Bratton and Daily Spark Radio with Dr. Angela Chester.