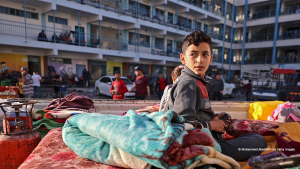 A Palestinian boy who fled his home due to Israeli air and artillery strikes sits on a mattress at a school in Gaza City. Photo: Mohammed Abed/AFP via Getty Images

GCE is concerned about military targeting of schools in the Gaza Strip, resulting in the injury and death of children, teachers and destruction of facilities.

JOHANNESBURG, GAUTENG, SOUTH AFRICA, May 15, 2021 /EINPresswire.com/ — The Global Campaign for Education (GCE) is extremely concerned about the use of schools and civil infrastructure as military targets in the Gaza Strip, resulting in the injury and death of children and teachers and the destruction of education facilities and housing.

The intensive use of airstrikes by the Israeli Defence Force against targets in the Gaza Strip has resulted in very significant harm to the civilian population, loss of life, and the destruction of schools, other public buildings, and residential properties.

The recent report Education Under Attack 2020 (GCPEA, 2021) reveals that Palestine has been significantly affected by attacks on schools during recent years, where over 500 incidents were reported between 2015 and 2019. In fact, Palestine is ranked third in the world amongst the countries most affected by attacks on students, teachers, and other education personnel during the same period and the use of schools and universities for military purposes was also significant. In the latest year, more than 23,000 children have been affected. 113 out of the 118 incidents were committed by Israeli forces and the remaining five by Israeli settlers (UN, 2019). These incidents included military confrontations in areas near schools, arrest operations in schools, settler violence against schools, restrictions on access to education, the arrest and intimidation of students and teachers, and a military presence in the vicinity of schools.

Despite international human rights and humanitarian laws clearly stating that states and the international community are responsible for ensuring the right to education in contexts of emergency, recent attacks have harmed at least 36 schools and hundreds of students and teachers. Reports also indicate that a number of schools are being used as unplanned temporary shelters by displaced people in North Gaza and in Gaza City.
The Global Campaign for Education calls for an immediate ceasefire and calls upon the international community, Education Cannot Wait (ECW) and United Nations (UN) based organisations to deliver emergency education supplies to displaced children and young people and to mobilise resources to rebuild damaged education facilities.