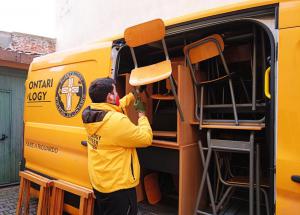 Volunteer Ministers from the Church of Scientology of Padua filled their bright yellow van with desks and chairs to help for a school in Glina damaged by the earthquake. 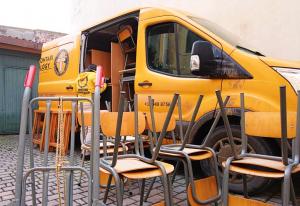 Furniture destined for the school in Glina, Croatia 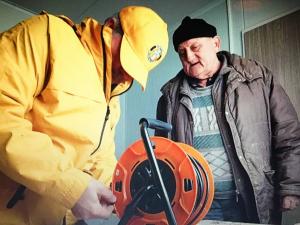 The Volunteer Ministers also brought supplies, tools and heaters to help set the school up to be opened.

Scientology Volunteer Ministers help provide stability for children of Glina, Croatia, whose lives were upended by the 29 December earthquake.

LOS ANGELES, CALIFORNIA, UNITED STATES, February 21, 2021 /EINPresswire.com/ — Spurred on by concern for children traumatized by the earthquake, Volunteer Ministers from the Churches of Scientology of Turin, Milan and Padua raised funds to reopen a damaged school in Glina, one of the towns hardest hit by the temblor.

A team of Volunteer Ministers headed by Ettore Botter, who oversees the humanitarian campaigns of the Church of Scientology Padua, took off in their bright yellow van with school desks and chairs, heaters, wire, equipment and tools needed to help the school reopen.

“Tens of thousands of Croatians were left homeless and without electricity by the earthquake,” Botter says. “These are our neighbors and they need so much right now, especially winter clothes, heaters, extension cords, and equipment to bring electricity to makeshift shelters and to power household appliances.” The Volunteer Ministers are planning another humanitarian trip to the region by the end of February.

The Church of Scientology Volunteer Ministers program is a religious social service created in the mid-1970s by Scientology Founder L. Ron Hubbard. It constitutes one of the world’s largest independent relief forces.

With the events of the 9/11 terrorist attacks in New York City, Scientology ecclesiastical leader Mr. David Miscavige called on Scientologists to redouble their efforts to aid their fellow man. He issued a directive entitled “The Wake-Up Call,” which inspired astonishing growth within the Volunteer Minister program.

The following year, Volunteer Ministers of Italy formed Pro.Civi.Co.S, which was entered into the registry of the National Department of Civil Defense.

Volunteer Ministers of Pro.Civi.Co.S are part of the civil protection team that guards against damage from flooding, a frequent problem in Northern Italy. They are on call to help avert or contend with disasters at home and abroad.

Pro.Civi.Co.S helped provide civil protection for the August 2013 Turin World Master Games and the 2006 Winter Olympics. They responded to Italy’s L’Aquila and Amitrice earthquakes, the Haiti earthquake in 2010 and the South Asia tsunami in Indonesia in 2005.

A Volunteer Minister’s mandate is to be “a person who helps his fellow man on a volunteer basis by restoring purpose, truth and spiritual values to the lives of others.” Their creed: “A Volunteer Minister does not shut his eyes to the pain, evil and injustice of existence. Rather, he is trained to handle these things and help others achieve relief from them and new personal strength as well.”