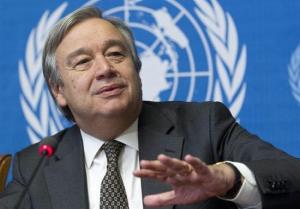 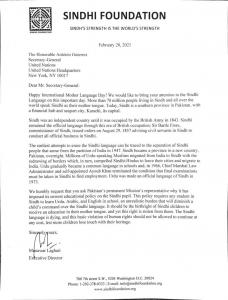 Letter on the Language Day

Our responsibility is to put more efforts towards saving Sindhi language by creating more opportunities to learn, speak, read, and write in Sindhi language and focussing on the younger generation”
— Munawar Laghari

WASHINGTON, DC, USA, February 20, 2021 /EINPresswire.com/ — The Sindhi Foundation has a message for UN Secretary General António Guterres this International Mother Language Day, on February 21st. International Mother Language Day is a worldwide annual observance to promote the awareness of linguistic diversity and to highlight the importance of the right to education in one's own mother tongue.

The Sindhi Foundation is calling on the UN Secretary General to look into new education policies in Sindh, Pakistan, that will contribute to the further erasure of the Sindhi language.

“This policy requires any student in Sindh to learn Urdu, Arabic, and English in school, an unrealistic burden that will diminish a child’s command over the Sindhi language,” mentioned in the letter, “The Sindhi language is dying, and this basic violation of human rights should not be allowed to continue at any cost, lest more children lose touch with their heritage.”

To raise awareness on the loss of Sindhi language and culture, and similar transgressions faced by Sindhi people and indigenous communities around the world, the Sindhi Foundation is planning the Long Walk for Freedom, Nature, and Love in April 2021. The 350-mile walk will begin at the United Nations headquarters in New York City on April 7th and end in Washington D.C. on April 29th, featuring actions and meetings with community leaders en route. The walk will raise awareness for global human rights violations and the climate crisis which binds us together.

“It is the responsibility of Sindhi people and the leaders to put more efforts towards saving the Sindhi language by creating more opportunities to learn, speak, read, and write in Sindhi language and focussing on the younger generation” said Laghari

The Sindhi Foundation is a 501(c) 3 nonprofit organization based in Washington, D.C. that builds bridges between Sindhi people and the international community, promoting peace and open cultural expression for all marginalized communities. To learn more about the Sindhi Foundation or the Long Walk for Freedom, Nature, and Love, visit their website at