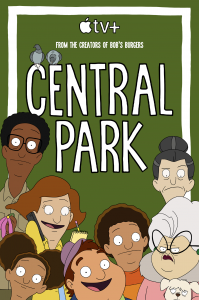 “Central Park” is an animated musical comedy about the Tillermans, a family that lives in Central Park. Owen, the park manager, and Paige, his journalist wife, raise their kids Molly and Cole in the world’s most famous park, while fending off hotel heiress Bitsy Brandenham and her long suffering assistant Helen, who would love nothing more than to turn the park into condos.

The new series premieres globally on Apple TV+, a new home for the world’s most creative storytellers. Apple TV+ is available on the Apple TV app on iPhone, iPad, Apple TV, iPod touch, Mac, select Samsung smart TVs, Amazon Fire TV and Roku devices, as well as at tv.apple.com, for $4.99 per month with a seven-day free trial.