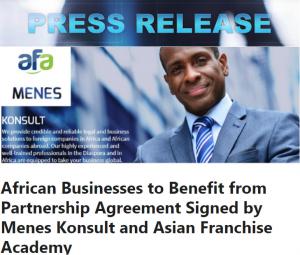 The doors were thrown wide open for African businesses to benefit from franchising opportunities and also take their brands beyond their borders when the Nigerian-American legal and business firm, Menes Konsult, signed a formal partnership agreement with Asian Franchise Academy (AFA) on March 17, 2020. This partnership also positions Asian Franchise Academy to become a leader in business and franchising consultancy in Africa. It also allows AFA’s clients all over the world to benefit from the legal and business services offered by the team of lawyers and business specialists at Menes Konsult. Africa Franchise Academy, the new company formed by the partnership, will trade as Africa Franchise Alliance and will be incorporated in Singapore and Menes Konsult will own majority shares in the new company.

The parties have been discussing and negotiating for a number of months before eventually reaching a consensus on all terms of the partnership. The agreement was signed on behalf of Menes Konsult by its president, Attorney N. Jude Menes of Dallas, Texas, while Mr. Patrick Mauser, the Founder and CEO of Asian Franchise Academy signed on behalf of AFA.

Commenting on the agreement, Attorney Menes remarked that, through the Africa Franchise Academy, African entrepreneurs who have invested lots of resources and built a great brand will now have the opportunity to take their brands not only Africa-wide, but also worldwide. He observed that, although the idea of franchising is still new to Africa, many homegrown African brands can do very beyond their borders just like McDonalds, Dominos Pizza, Burger King, have done outside America. He stated that he is confident that his firm’s partnership with the Asian Franchise Academy (AFA) will accomplish the intended goal of making African brands popular outside the continent because AFA and Menes Konsult not only have the right vision, experience, commitment, but the timing is also very right.

On his part, Mr. Mauser expressed delight at the formation of the partnership and remarked that Menes Konsult is well-positioned to best serve existing and potential clients of AFA in Africa. He stated that the newly formed partnership is a strategic development which will allow AFA to substantially grow in Africa. According to Mr. Mauser, AFA is now poised to become a great force within the SME sector in Africa. He stated that his vision is to bring together the Asian, African, and Arabian markets into one outstanding global force that will provide great franchising and expansion opportunities to African businesses and brands.

Menes Konsult was formed through collaborative efforts of African professionals in the United States who are committed to promoting the development of African countries by facilitating business relations between Africa and the rest of the world. The firm represents foreign companies and investors to successfully do business in Africa by helping them avoid the risks created by fraud, corruption, and other local issues in the continent. Additionally, the firm assists African governments and companies to access funds to execute projects that are not only potentially profitable, but also have the potential to improve the lives of citizens. Menes Konsult has offices and/or accredited representatives in major African cities.