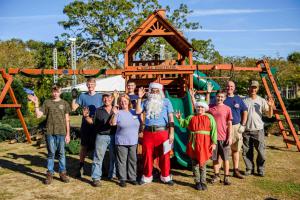 Members of Troop 313 pose for a picture with Santa Claus and his chief elf while helping to install Christmas trees for the annual Winter Wonderland Christmas Village in Clearwater. Chartered by the Church of Scientology Troop 313 earned over 100 merit badges this year.

Boy Scouts Troop 313 ends 2019 with a bang, earning over 100 merit badges, rank advancements in addition to their relentless desire for community service.

CLEARWATER, FL, US, December 5, 2019 /EINPresswire.com/ — It has been quite a year for Scout Troop 313 chartered by the Church of Scientology Flag Service Organization. In between campouts, events and troop meetings the Scouts have kept themselves quite busy.

This year, these Scouts earned more than 100 merit badges, participated in 12 summer camps and held 30 events such as honor guards, fundraisers and community events.

“In total, we installed 80 trees in two days” said Joel Anderson, construction manager for Winter Wonderland. “I could not have made that progress without the Scouts, they are young and very willing to help, which makes all the difference. With their assistance we will be able to provide a memorable Christmas to families in Clearwater.”

Capping 313’s year will be the Presentation of the Colors at the grand opening of Winter Wonderland on December 7th.

Lord Robert Stephenson Baden-Powell founded the Boy Scouts in 1910, after completing his service in the British Army. Baden-Powell had experience in the field – training boys to administer first aid, carry messages and run errands. This fieldwork led Baden-Powell to form the Scouts.

Scouting has not strayed far from its roots, providing outdoor adventure, helping others and teaching scouting skills – all of which remain the most iconic of its activities to this day.

“Troop 313 is proud of forwarding that legacy of Scouting,” said Aiden Eisenman, Senior Patrol Leader for Troop 313. “Some boys from the Troop were shy and always on their cell phone when they first joined. But after camps and as we earn badges and become more competent, we really become better at handling life and that’s why I like serving our troop.”

Troop 313 is open to boys of any faith, as with any troop. Participants in the Scouting program are encouraged to be faithful and loyal, as laid out in the Scout Oath and Law.
L. Ron Hubbard, Founder of Scientology and Eagle Scout himself, felt that Scouting was very important. He mentioned that the training he received saw him safely through the Second World War, during which he was a US Naval Officer. L. Ron Hubbard said, “Of all the various information which became important to me, such as photography, woodlore, signaling and many other subjects, the basis of it was laid in Scouting. I am very indebted to a great many, very fine men who gave their time and attention to a restless, boisterous and extremely active boy and teenager, and I must have tried their patience many times but I never heard of it from them.”