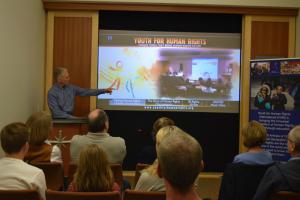 Director of the Youth for Human Rights International Twin Cities chapter informed guests about what they can do to help victims of human trafficking. 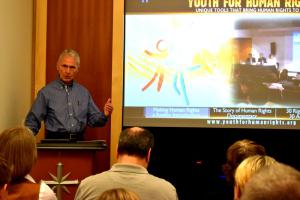 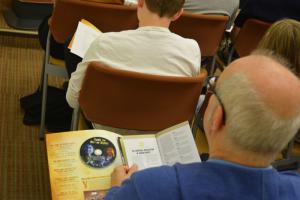 Each guest was presented with Youth for Human Rights educational materials.

Youth for Human Rights and the Church of Scientology Twin Cities teamed up to educate community partners on human trafficking: how to report and prevent it.

LOS ANGELES, CALIFORNIA, UNITED STATES, October 8, 2019 /EINPresswire.com/ — Human trafficking is an urgent situation in Minnesota, said the head of the local chapter of Youth for Human Rights International (YHRI) at a forum hosted by the Church of Scientology of Twin Cities to educate the community on the issue.

The office of the Minnesota Attorney General reports that a six-month study by local prosecutors found over 34,000 advertisements posted online for sex in the Twin Cities. An online sting in southwest Minnesota led to the arrest of 48 individuals. One 16-year-old, trafficked in northern Minnesota, stated she was exploited on average by five men every day.

The state attorney general office website contains information on the various agencies where suspected sex trafficking can be reported and Youth for Human Rights urges Minnesotans to become familiar with this site and use it if they become suspicious of an instance of human trafficking.

YHRI Minnesota chapter director Bert Haglund focused on what each individual can do to create a more peaceful and fair environment, emphasizing that education on the 30 rights enshrined in the Universal Declaration of Human Rights (UDHR) is essential. To defend these rights, it is vital that people understand them. An estimated 90 percent of people surveyed are unable to name more than three of their human rights, he said.

Eleanor Roosevelt was the primary architect of the Universal Declaration of Human Rights. When asked who will ensure that human rights are respected, she stated, “Where, after all, do universal human rights begin? In small places, close to home—so close and so small that they cannot be seen on any maps of the world…. Without concerted citizen action to uphold them close to home, we shall look in vain for progress in the larger world.”

The Church of Scientology supports Youth for Human Rights and makes its materials available free of charge to anyone wishing to educate others on their rights and responsibilities. Scientology Founder L. Ron Hubbard wrote, “Human rights must be made a fact, not an idealistic dream.” The Code of a Scientologist calls on all members of the religion to dedicate themselves to “support true humanitarian endeavors in the fields of human rights.”

Watch Voices for Humanity on the Scientology Network to learn what humanitarians are doing to expose and handle human trafficking in such hotspots as Florida and Mexico.

The 30 Articles of the Universal Declaration of Human Rights