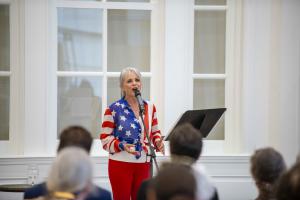 Ms. Joanie Sigal performing at the May 26th Memorial Day Weekend concert at the Scientology Information Center. The Information Center is located in Downtown Clearwater and open daily 10am-10pm. All are welcome.

A culture is only as great as its dreams, and its dreams are dreamed by artists.”
— L. Ron Hubbard

CLEARWATER, FLORIDA, US, September 12, 2019 /EINPresswire.com/ — With the official first day of fall landing on Monday, September 23rd, a little over 2 weeks away, Ms. Joanie Sigal will return to Downtown Clearwater to welcome the season in Broadway style with a musical concert on Sunday, September 29th. Ms. Sigal will perform at the Scientology Information Center at 500 Cleveland Street, Clearwater, Florida.

Joanie delivered a stirring and inspiring musical tribute for those who’ve served with a Memorial Day Concert on May 26th 2019. This honored not only her own family’s extensive military background, but those in the armed forces all over the world.

Due to requests from Joanie’s fans and her own love of singing and music her next concert is scheduled to celebrate fall. The event will begin with a light reception and will end with a meet and greet with the artist.

Ms. Sigal will perform well-loved songs from many genres, including country, blues, jazz, pop as well as songs from Joanie's signature repertoire from popular musicals such as Cats and Phantom of the Opera.

"Joanie's vocal range, versatility and delivery set her apart from many artists out there,” said Amber Skjelset, Manager of the Scientology Information Center. "Attendees at her concerts come away saying that they feel they were watching a performance on Broadway or the Metropolitan Opera House in New York. I believe she naturally demonstrates what L. Ron Hubbard once wrote about artists where he said, 'A culture is only as great as its dreams, and its dreams are dreamed by artists.'"

To learn about upcoming cultural events at the Center or to learn more about the Scientology Information Center, please contact Amber at 727-467-6966 or amber@cos.flag.org.

The Scientology Information Center, located in the century-old Clearwater Building in downtown Clearwater, opened on July 11, 2015, and currently houses a gallery of audiovisual displays with some 400 videos. The Center is open to all and provides a self-guided tour showing basic Scientology beliefs, Churches around the world, ongoing social programs and the life of L. Ron Hubbard, Scientology's founder. The Center offers tours to the broad public and civic leaders; holds concerts, theatrical performances and receptions for the community; and opens up the use of its conference room to social, civic and non-profit groups.