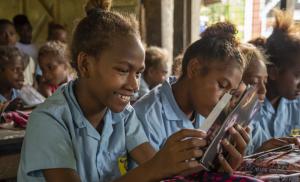 Empowering young men and women, many of whom never knew they had the right to education or the freedom to pursue their dreams. 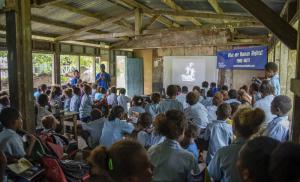 Although the Universal Declaration of Human Rights was adopted 70 years ago, it meant little to the youth in this village in the Solomon Islands until now. 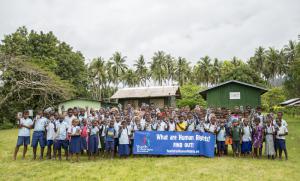 Human rights education empowered a group of young men and women as they learned of the 30 rights of the Universal Declaration of Human Rights.

LOS ANGELES, CALIFORNIA, UNITED STATES, August 31, 2019 /EINPresswire.com/ — One look at the faces of the children attending the Youth for Human Rights seminar at a primary school in the village of Sahalu in the Solomon Islands showed that learning they had rights was a revelation.

“They need to know their rights,” said one of the teachers. “In some parts of the provinces, parents tell their daughters not to go to school. Just stay at home and do housework. Some girls are even sold to the loggers to marry when they are as young as 12. Some girls are told school is for boys only.” He wants to incorporate the Youth for Human Rights education program in his health lessons and make sure all students learn their rights.

“I didn’t even know these 30 Human Rights existed,” admitted one teacher.

Another said the lecture was “eye-opening” and vital “because the concept of 30 Human Rights is important for the wellbeing of a child.”

Youth for Human Rights International (YHRI) is the youth component of United for Human Rights(UHR). It is a global nonprofit organization founded in 2001 with the purpose to inspire youth to become advocates for tolerance and peace by educating them on the United Nations Universal Declaration of Human Rights. UHR has now grown into a global movement with over 150 chapters and its educational materials are translated into 27 languages, bringing the message of human rights to 195 nations.

The Youth for Human Rights public service announcements and The Story of Human Rights educational film air on the Scientology Network in 17 languages and on hundreds of other television stations around the world.

Read this article on the Scientology Newsroom.

The Church of Scientology and Scientologists support United for Human Rights and make their educational materials available free of charge. For more information visit the Scientology website or Scientology.tv.

Watch 30 Rights Brought to Life on the Scientology Network.

Youth for Human Rights: We Are All Born Free and Equal