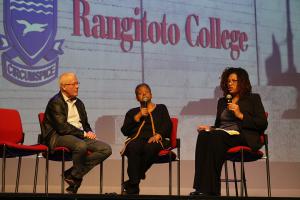 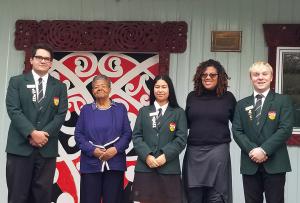 You can literally save the life of someone who is being bullied by being kind to them.”
— Elizabeth Eckford

“You can literally save the life of someone who is being bullied by being kind to them,” said Eckford. “I speak from experience. Two students reached out to me in Speech class, my last class of the day. Their kindness gave me something to look forward to while enduring the hateful actions of other classmates.” Eckford remains friends with those students, Ken Reinhardt and Ann (Williams) Wedaman, to this day.

Stanley and Eckford were intrigued when they discovered African American history is taught extensively in many New Zealand high schools. It is a topic of great interest. From August 4 – 14, 2019, the authors presented civil rights history, current events impacting the African American community, Stanley’s personal experience with police brutality in Georgia and Eckford’s special anti-bullying message to students and teachers. The presentations, attended by 85 schools, were held at 10 locations throughout Auckland, Christchurch and Dunedin.

Eckford presented an overview of the civil rights movement and expounded upon insights from her autobiography, The Worst First Day, which leverages civil rights history to combat bullying. The book is written in verse and features captivating images that impact and inspire readers of all ages. Eckford was the first member of the Little Rock Nine to arrive at Little Rock Central High September 4, 1957 to desegregate the school. At age 15, she was blocked from entering Central High by enraged segregationists and Army Arkansas National Guard Soldiers deployed by Governor Orval Faubus. A photo captured of Eckford that day by photographer Will Counts became one of the most iconic images of the 20th century.

The Little Rock Nine were physically and mentally attacked by students who did not want them at Central. They were told by administrators they would be removed from the school if they retaliated. The Nine endured the attacks to help implement the 1954 Supreme Court Brown v. Board of Education decision which ended school desegregation. Their efforts and those of other “firsts” who were trailblazers resulted in the diversity seen in today’s schools.

Stanley shared her account of falling victim to police brutality in Sycamore, Georgia in 2000 in a presentation titled “The Opportunity Cost of the Call.” She discussed the rising number of African Americans being reported to law enforcement on false charges by Caucasian passersby and her own experience with being reported and attacked by local deputy sheriffs. “I will never forget someone hearing my story casually saying, ‘Sounds like walking while Black…happens every day.’ It shouldn’t happen to anyone. People are losing their lives due to false calls and the overzealous actions of some law enforcement officers.” said Stanley.

Fulbright Scholar and James Cook High School Teacher Roydon Agent invited Eckford and Stanley to New Zealand. Agent stated, “We teach this as an academic exercise, but they live it every day.” Agent authored Public Image, Private Shame, a textbook that studies Black Civil Rights in the United States. Additional talks included U.S. Embassy representatives who presented an overview of American Presidential elections and four members of the Polynesian Panthers, a social activist movement founded in the 70’s that fought against racism and discrimination for Pacific Islanders. Now, Polynesian Panthers Will Ilolohia, Melanie Anae, Alec Toleafoa and Tiglan Ness present in New Zealand schools to ensure students understand the efforts that took place to combat racism against Pacific Islanders in the past and the importance of continued efforts to end discrimination.

The last two tour presentations featured Katelyn Choe, U.S. Consul General, the senior ranking U.S. diplomat in New Zealand. Choe encouraged students to learn from Eckford’s experiences and show “compassionate empathy” toward one another. She noted the students in attendance were “…the future Kendall Reinhardt’s and Ann Williams’ who will stand up not just for your own rights, but more importantly for the rights of those who are hurting and being bullied.”

Eckford thoroughly enjoyed the trip. She stated, “This was my first time traveling to New Zealand. Reaching so many students interested in learning African American history was extremely gratifying, as was receiving video greetings from Prime Minister Jacinda Ardern.” Ardern graciously send a video to Eckford welcoming the Civil Rights Icon to New Zealand.

A key message of The Worst First Day is resilience and tenacity. Readers are encouraged to learn from Eckford's example and #WalkPastHate.

The Worst First Day is available on Amazon at bit.ly/worst1st. The book was recently awarded the 2019 Children’s Book of the Year Indie Author Legacy Award (IALA). Learn more about The Worst First Day: Bullied While Desegregating Central High on www.worstfirstday.com.