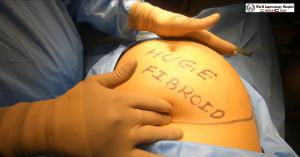 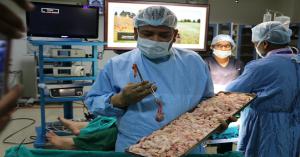 GURUGRAM, HARYANA, INDIA, May 22, 2019 /EINPresswire.com/ — Laparoscopic Surgery is very common now for most of the surgical diseases but one of the limitations is to remove large tissue. It is not rare nowadays for a patient to have coexisting multiple pathologies of the gallbladder, uterus, ovary, and appendix that should be ideally treated at the same time. A surgeon may face a situation of elongating or even making another incision when performing open surgery. in such a case, an experienced surgeon is required who may well solve the problem in laparoscopy. However, all the experienced surgeons are now seeking to further this advantage by decreasing the number of trocars and avoiding visible scarring.

In this context, Dr. R.K. Mishra of World Laparoscopy Hospital has created a World Record. First time in the World 3.5 Kg Fibroid, Ovarian Cyst, Gallbladder and Appendix removed by Laparoscopy in the Same Patient. The patient has torsion of Myoma giving severe pain, She had multiple episodes of appendicitis in the past. She had Cholelithiasis and one paraovarian cyst. All were removed by laparoscopy. The surgery took 6-hour time. Only 4 ports were used to remove all these pathologies. She was also having hydronephrosis due to the pressure of fibroid on the ureter.

Dr. R. K. Mishra is one of the most experienced professors of laparoscopic and robotic surgery who has alone trained more than 11000 surgeons and gynecologist from more than 138 countries. He has vast experience of teaching laparoscopic and da Vinci robotic surgery. He is Professor of Minimal Access Surgery and his endeavor of starting a unique university laparoscopic surgery training program was started in Ninewells Hospital and Medical School, U. K. with Professor Sir Alfred Cuschieri. Dr. Mishra has taken his Diploma in Laparoscopic Surgery from the university of Strasbourg, France. He has completed his surgical residency and Master degree in Minimal Access Surgery (M.MAS) from Ninewells Hospital and Medical School, University of Dundee, United Kingdom. During his work in the United Kingdom, Dr. Mishra has discovered the optimum shadow-casting illumination technique to improve the task performance of laparoscopic surgery and his research is now used by eleven laparoscopic instrument companies to make ideal shadow casting telescope. This original research of shadow in laparoscopy was published in the Archive of Surgery.

Dr. Mishra is among few fortunate who has been conferred the degree of Master in Minimal Access Surgery by Sir James Whyte Black (Nobel Prize Winner in Medicine) and the most prestigious Chancellor in the history of University of Dundee, United Kingdom. After mastering Laparoscopic Surgery, Dr. Mishra has further refined his robotic surgery training at Harvard Medical School, Boston, USA.

In the experienced hand combined myomectomy, Ovarian cystectomy, cholecystectomy, and appendectomy appears to be technically feasible and can be performed with conventional laparoscopic instruments. However, the increased operative time and technical difficulty are the main concerns with this method. Combine laparoscopic surgery until today has been performed only in the limited number of patients in short observation time. Further studies with longer follow-up time are required to confirm these findings and determine the true benefits of the procedure.